U.S. regulators have relied on flawed and outdated research to allow expanded use of an herbicide linked to cancer, and new assessments should be urgently conducted, according to a column published in the New England Journal of Medicine on Wednesday.

There are two key factors that necessitate regulatory action to protect human health, according to the column: a sharp increase in herbicide applied to widely planted genetically modified (GMO) crops used in food, and a recent World Health Organization (WHO) determination that the most commonly used herbicide, known as glyphosate, is probably a human carcinogen.

The opinion piece was written by Dr. Philip Landrigan, a Harvard-educated paediatrician and epidemiologist who is Dean for Global Health at the Mount Sinai Medical Centre in New York, and Chuck Benbrook, an adjunct professor at Washington State University’s crops and soil science department.

“There is growing evidence that glyphosate is geno-toxic and has adverse effects on cells in a number of different ways,” Benbrook said. “It’s time to pull back … on uses of glyphosate that we know are leading to significant human exposures while the science gets sorted out.”

The column argues that GMO foods and herbicides applied to them “may pose hazards to human health” not previously assessed.

“We believe that the time has therefore come to thoroughly reconsider all aspects of the safety of plant biotechnology,” the column states.

The authors also argue that the U.S. Environmental Protection Agency has erred in recently approving a new herbicide that uses glyphosate because it relied on outdated studies commissioned by the manufacturers and gave little consideration to potential health effects in children.

Glyphosate is best known as the key ingredient in Roundup developed by Monsanto Co (MON.N), one of the world’s most widely used herbicides, but it is used in more than 700 products.

It is sprayed directly over crops like corn genetically engineered to tolerate it and is sometimes used on non-GMO crops, like wheat before harvest. Residues of glyphosate have been detected in food and water.

The WHO’s cancer research unit after reviewing years of scientific research from different countries on March 20 classified glyphosate as “probably carcinogenic to humans.”

But regulators and agrichemical companies in the United States and other countries still consider glyphosate among the safest herbicides in use.

In July, Monsanto said it had arranged for an outside scientific review of the WHO finding. 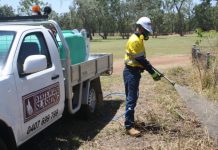